The architecture of an Ehcache node can include a number of tiers that store data. One of the most important aspects of managing cached data involves managing the life of those data in those tiers. 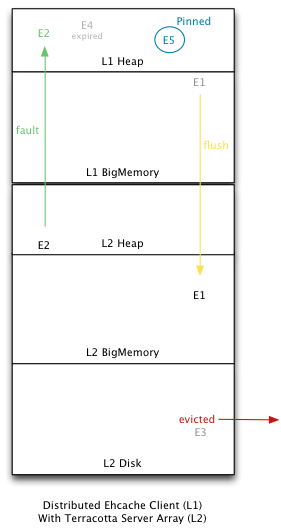 Use the figure at right with the definitions below to understand the life of data in the tier of Ehcache nodes backed by the Terracotta Server Array (TSA), available with BigMemory Max. These definitions apply similarly in standalone Ehcache, which is limited to two tiers (heap and disk). BigMemory Go can add an off-heap tier to standalone nodes.